What else is down there, eh? 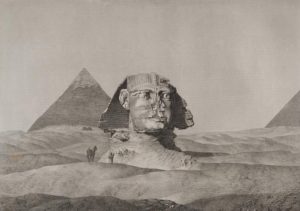 Of course, it’s the sphinx. Everyone knows that. Everyone. Since the beginning of time. Really? Odd. Did you know that when the Greek historian Herodotus visited Egypt in 450 BCE (Before the Christian Era), he did not see the sphinx?  Why not? Because it was covered with sand. Scientists say sand dunes in Egypt can be as deep as 1,500 feet and, shall we say, ‘move around.’ In 450 BCE, a century before Alexander the Great, the sphinx was buried in sand. It only ‘reappeared’ in the 1400s. Which leaves us to ask: what else is out there now, buried in 1,500 feet of sand, that Herodotus saw and we have yet to discover? And, for historical accuracy, French soldiers under Napoleon did not shoot off the nose of the sphinx. That was done in 1378 of the modern era by a Muslim named Muhammad Sa’im al-Dahr. He was in control of Egypt and was outraged when he saw Egyptian peasants were making offerings to the sphinx for a more productive flooding of the Nile. He destroyed the nose of the sphinx in vengeance – and then he was executed for vandalism. If you get a chance, take a look at one of my short stories at https://retreatsfromoblivion.com/2018/08/29/the-matter-of-the-smallgarian-wall-and-the-portuguese-undertaker-by-steve-levi/ [See my books at https://authormasterminds.com/master-of-the-impossible-crime. See my webinar at http://bit.ly/2zjyiYG.]