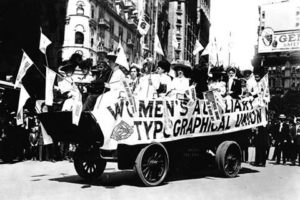 There is a stark lesson in the Brett Kavanaugh nomination imbroglio.  It is as old as America.  You only have the rights you are willing to fight for. Contrary to popular belief, Constitutional guarantees can vaporize. As an example, the Constitution states that confirmation to the United States Supreme Court requires a 2/3 vote in the United States Senate. That did not happen with Neil Gorsuch or with Brett Kavanaugh. Union membership is plummeting and there are more nonpartisan voters than Democrats and Republicans combined. The United States Congress is less popular than hemorrhoids, root canals and herpes. In the past, as illustrated in this photograph from about 1910, we, Americans, fought for our rights as a community. Together we are stronger than as individuals scattered across an industry, issue or the country. History is repeating itself. How powerful we are as a nation depends on what we, individually, do on election day. If you get a chance, take a look at one of my short stories at https://retreatsfromoblivion.com/2018/08/29/the-matter-of-the-smallgarian-wall-and-the-portuguese-undertaker-by-steve-levi/ [See my books at https://authormasterminds.com/master-of-the-impossible-crime. See my webinar at http://bit.ly/2zjyiYG.]