Just a pile of rubble 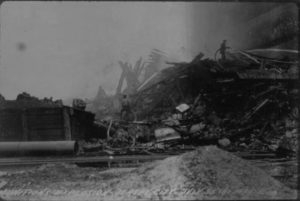 Just a pile of rubble, eh? It’s the aftermath of the LARGEST terrorist attack in American history. TWO MEGATONS.  The blast in New York harbor was so great it was felt in Philadelphia. And it happened 104 years ago, on July 30, 1916. This is what is left of Black Tom Island, named either for an early African-American resident or because the island’s profile vaguely resembled a black cat with an arched back, was a small mound of earth jutting out of New York Harbor, a stone’s throw from Ellis Island and the Statue of Liberty.  The perpetrating groups were identified and their prosecution was the longest and most expensive trial in American history up to 1917, and is known as the Annie Larson Affair. And talk about truth being stranger than fiction, the bomb was set off by a fake cigar and there were three perpetrating groups were India’s Ghadar Party, the Irish Republican Brotherhood and the German Foreign office.