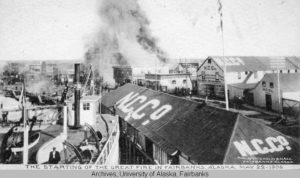 On May 22, 1906, the city of Fairbanks  — in the District of Alaska since it was not yet a Territory — appeared doomed. A massive fire was threatening to burn down the entire city and all that stood between the roaring flames and extinction were the fire hoses. But there were too many fire mains opened and the pressure was dropping critically low. When word was sent to the power station for more pressure but the man operating the boilers had no more wood. Had that man not been Volney Richmond, Fairbanks manager of the Northern Commercial Company, the city of Fairbanks would have been, quite literally, wiped off the face of the earth. Resourcefully, Richmond ordered the larder of the Northern Commercial Company opened and 2,000 pounds of bacon removed. Slab by slab the bacon was tossed into the city’s boilers and the pressure of the fire hoses went up. Fairbanks was saved and the Northern Commercial Company was in the odd position of saving its own bacon by consuming it. www.authormasterminds.com/steve-levi