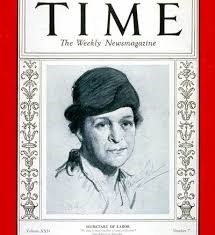 This Labor Day let’s remember – and thank – Francis Perkins. She was the longest serving United States Secretary of Labor, 12 years, 1933 to 1945, from the depths of the Depression through World War II. Because of her leadership America was blessed with the Civilian Conservation Corps, Public Works Administration, National Industrial Recovery Act and the Federal Works Agency.  She oversaw the formation of the Social Security Act which provides unemployment benefits, pensions to the elderly and welfare to the poorest Americans. She pushed through laws against child labor and established the FIRST minimum wage and overtime laws in American history with the Fair Labor Standards Act. Many of the economic and labor realities we take for granted today were originated by Perkins. Thus it is appropriate for us to honor her today.  www.authormasterminds.com/steve-levi