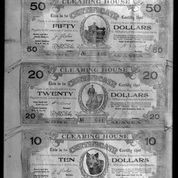 Money. We all want it. But, in fact, it does not exist. Don’t believe me? OK, go down to your bank and ask to see the $850 in your checking account. The teller will laugh. Because that money does not exist. Your money is just an electronic file. Money, as in cash, has always been a problem. In the days before checks and credit cards, you had to have the actual paper bills in your possession.  Without the paper bills, you had no money. And this was a problem because you could be owed millions but until you were paid – in cash – by those who owed you money, you were broke. It was also a problem because everyone wanted United States dollars. Dollars backed up by the United States government.  But those bills were not widespread until after the First World War.  This was a particularly difficult problem in Alaska during the Alaska Gold Rush because everyone had to spend money but there were not enough United States dollars to go around. So what did the businesses do?  They printed their own money. As long as you spent Nome money in Nome, it was accepted as real. But the moment you left Nome; the Nome money was just paper.  And today, that money is just, well, historical paper. www.authormasterminds.com/steve-levi