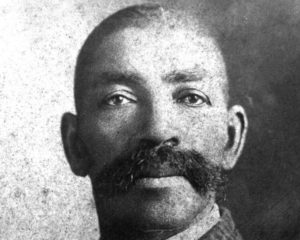 This is a portrait of Bass Reeves. He was the first black Deputy United States Marshal west of the Mississippi.  During his career – ALONE – he arrested more than 3,000 felons and killed 14 people in self-defense. He died in 1910.  Because he was black, he never received the accolades he should have in his lifetime.  And to this day, few people know THE LONE RANGER, which ran on television in the 1950s, is based on the life of Bass Reeves. THE LONE RANGER could not be black then so, instead, he wore a black mask. www.authormasterminds.com/steve-levi.