“How do you stop a mutiny with just one word? Ask Julius Caesar.” 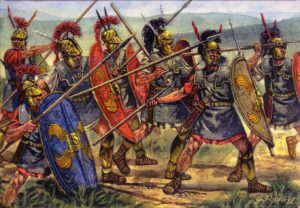 In 47 BCE, Julius Caesar was faced with a mutiny.  The Tenth Legion was demanding unpaid wage for their service and balking at going to the war in Africa. Worse, they were threatening to ravage the city of Rome. It was a tense situation and Caesar’s associates advised him to disband the Tenth Legion.  But Julius Caesar was a creative thinker. And he knew exactly what to do. He met with the rambunctious Tenth Legion and said just one word:  Quirites.  Quirites were civilians. And as civilians no member of the Tenth Legion was entitled to any share of the booty looted from war. They were, in modern parlance, ‘on their own on the street.’  History records the soldiers shouted “No! No! We are soldiers! And they followed Caesar into battle in Africa.