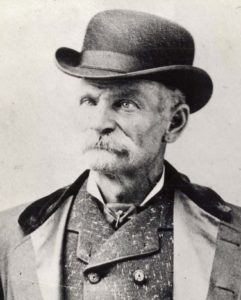 Before there was a Wild West, bandanas were the rage in England among the wealthy. Why? Because users of snuff blew their noses and ‘such activity’ left ‘residue’ on white handkerchiefs. A wily entrepreneur found a solution – and a profit – in India Textile makers in that country were manufacturing colored handkerchiefs using a tie-dying technique called  bandhani which, linguistically corrupted, became bandana. Since then, bandanas have been used as advertisements – including printing of the words and music to “We Want Teddy” for Theodore Roosevelt’s 1912 run for the Presidency – and to cover the nose and lips of stagecoach robbers in the Old West. One bandana became a part of history on November 3, 1883, when notorious stagecoach robber Black Bart tried to hold up a stagecoach on Funk Hill in Calaveras County, California. He was injured in the robbery and dropped a number of personal items – including a handkerchief with the laundry mark: F.X.O.7.  Wells Fargo Detective James B. Hume traced the handkerchief through a San Francisco laundry to a C. E. Boles.  Boles spent four years in San Quentin and was released in 1888.  Thereafter he vanished from the pages of history – except for his poetry, left at the scene of his robberies, one stanza reproduced here

I’ve labored long and hard for bread,
For honor, and for riches,
But on my corns too long you’ve tread,
You fine-haired sons of bitches.