“Who was the first and only person to interview a United States President when he was nude?” 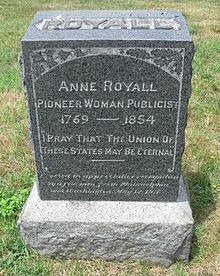 Anne Royall was one of – if not the first – first female journalist. She grew up poor in Pennsylvania and West Virginia. At 16 years of age she and her widowed mother were employed by a wealthy American Revolution major, William Royall, as servants. He eventually married Anne and she lived comfortably until 1812 – when she was 43 – when William died. The Royall family sued Ann for her inheritance and, after seven years of litigation, won and left Anne penniless. She spent four years traveling around Alabama writing letters which later became the book Letters from Alabama. She went to Washington D. C. in 1824 to petition for a federal pension as the widow of veteran. She received the pension, but the Royall family claimed most of it. While in D. C. she became a journalist and asked President John Quincy Adams for an interview. He turned her down.  Undismayed, she waited until the President went swimming in the Potomac River. As he was bathing naked, she sat on his clothes and refused to leave until he answered her questions making her the first presidential interview by a woman.

She wrote extensively and in 1831 started publishing an investigative newspaper, Paul Pry, out of her home. The paper focuses extensively on political corruption and fraud. Paul Pry grew into The Huntress in 1836. She hired orphans to set type for the journal and faced financial hardship with the Post Office refused to deliver her issues to subscribers. She died in 1854 and was buried in the Congressional Cemetery, a cemetery where plots are reserved for those who helped form the nation.