“You don’t want to mess with this guy!” 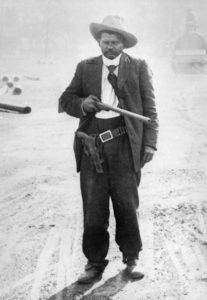 The Golden Age of Hollywood glamorized the cowboy and the Wild West. Unfortunately, what appeared on the silver screen ended up in our history books and far too many Americans believe all of the cowboys were white – and that all of the soldiers on the fronter were white.  And all the United States Marshals were white. Wrong! America’s frontier was a magnet for black slaves and later free blacks because, well, it was a frontier.  You could be ‘free’ and while the wages were not good, you would be paid for your work.  About 40% of all soldiers in the West were black – buffalo soldiers – and about the same percentage of cowboys were black, Mexican, Indian or a mix thereof.  And more than a fair share of United States Marshals, like this unnamed man, were black. So don’t believe everything you have seen at the movies.