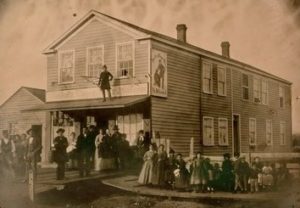 In 1854, Levi Boone became Mayor of Chicago on the Know-Nothing Party whose tenets were strongly anti-immigrant and what would later be called ‘America First.’ Boone, a Baptist and Temperance enthusiast, believed drinking was akin to worshiping the Devil – particularly on the Sabbath. So he dealt the Chicago liquor industry a double-blow: he ordered all taverns closed on Sunday and increased the cost of a liquor license by six times, from $50 to $300. It was not popular and viewed as anti-German because, of course, Germans were the only ones drinking beer. On April 21, 1855, a massive protest march was held which was so large Mayor Boone ordered the bridges over the Chicago River closed. A riot ensued and one of the protestors fired on the police, He was killed, the lone death of the riot. In the aftermath of the Lager Beer Riot, the price of a liquor license was dropped to $100.  Nothing was said of Boone’s attempt to honor the Sabbath by closing taverns on Sunday. The Sabbath is Saturday; Sunday is the first day of the week.