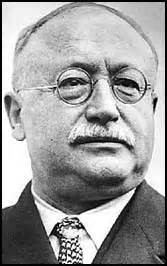 In 1910, Victor Berger, a founding member of the Socialist Party of America, was elected to the United States House of Representatives representing Milwaukee, Wisconsin. The Russian Revolution had not occurred so being a Socialist was not a big deal. But being a Socialist and of German stock was a big deal when World War I started. Berger’s opposition to the war – and being a Socialist – landed him in court for violated the Espionage Act. He was convicted and sentenced to 20 years in jail in February of 1919 – AFTER the end of World War I. (The judge in that trial was Kenesaw Landis who later became the first Commissioner of Major League Baseball.)  The Supreme Court overturned the conviction in January of 1921.

BUT, while on trial and during his appeal, Berger was re-elected to the United States House of Representatives in 1918. Congress refused to seat him in 1919 citing Section 3 of the 14th Amendment:

Section 3. No person shall be a Senator or Representative in Congress, or elector of President and Vice President, or hold any office, civil or military, under the United States, or under any State, who, having previously taken an oath, as a member of Congress, or as an officer of the United States, or as a member of any State legislature, or as an executive or judicial officer of any State, to support the Constitution of the United States, shall have engaged in insurrection or rebellion against the same, or given aid or comfort to the enemies thereof. But Congress may, by a vote of two-thirds of each House, remove such disability.

“You dumped WHAT out of the airplane?” 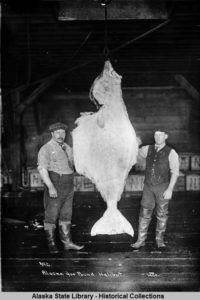 If you are a pilot and are planning on making airdrops, make absolutely certain that you and your partner have the signals straight. If you want to know why, ask Doug Geeting of Talkeetna. One Christmas while he was supplying a number of mountain climbers on Mt. Denali, Geeting received an order for a halibut.

Working with a cargo handler who was inexperienced, Geeting flew out for Mt. Denali with the requested halibut and an assortment of other goods for other climbers scattered up the mountain. When he arrived at the first encampment, he turned to his cargo thrower-outer and yelled “Halibut.”

So she opened the fuselage door and proceeded to toss out all of the cargo. It rained supplies on the mountain climbers. The halibut hit a tent and ripped it in two. A case of beer landed between two men inside another tent and sprayed them with foam. Other supplies pockmarked the landscape giving the campsite the appearance of a bomb-testing range.

Feeling the plane unexpectedly light, Geeting turned around to see what the problem was. When he saw the cargo bay empty, he asked what had happened to the cargo?

“No, I said ‘Halibut!'” Then he turned his Beaver and went back to see what kind of damage the falling cargo had done. But as he approached the campsite, he saw everyone scattering. They thought he was making a return run! 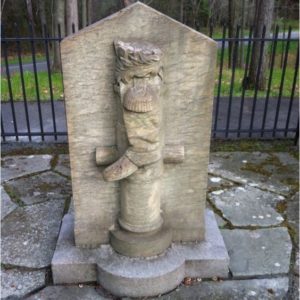 OK, history buffs. What’s this? Let me give you a hint.  It is the statue of a boot in Saratoga, New York, to honor of one of America’s greatest Revolutionary War heroes. At a crucial moment in the Battle of Saratoga, as American forces were getting the stuffing beat out of them, an American general, against direct orders of his commander, Horatio Gates, rallied troops loyal to him personally and turned the tide against the British.  How? He ordered a sniper to shoot the British Commander Simon Fraser. The shoot was – at that time – an astounding 300 yards.  The British advance fell apart and the British retreated. Then Horatio Gates claimed the victory had been his brainchild. The General in question was wounded in the leg and this statue honors – his leg. But his name is not on the statue or listed on the inscription on the back of the leg statue. Why not? Here’s his name, scrambled:

“Money does not exist.” 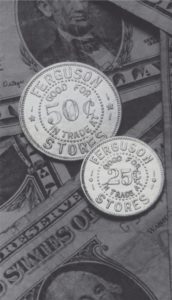 If you think money exists, go to your bank and ask to see the actual $500 in your checking account. Expect to be laughed at. That’s because money does not exist; just the illusion of it. This has been the problem since the cave. Wealth is the belief of the value of what you own. In the early days of Alaska, there were very few American dollars or coins so Alaskan businesses printed them. Called bingles, these were good in any store in the community where you lived.  It wasn’t called counterfeiting; it was called doing business the Alaskan way. The bingles were even good in the local United States Post Offices because the local Post Offices could redeem them for American dollars from the businesses which printed the bingles. All was going well until some Alaskans tried to use bingles in a United States Post Office in Seattle. That, as the expression goes, upset the applecart. Since then, it has been cash, check or credit card in even the smallest villages.

According to the Anchorage Daily News, an eagle with a fish in its talons was flying at an angle across the Juneau airport runway as the airplane was taking off. Just before the two flight paths intersected, the eagle dropped the fish. The fish and the airplane collided in midair. The eagle escaped, but the “fish, species unknown, was presumed dead.” The fact that the incident occurred on April Fool’s Day led some to believe the story had been faked. It had not.

The article also revealed that there had been a collision between a moose and an airplane in Cordova a decade earlier. “The moose collision” was different, as the newspaper clearly stated, for it “occurred on the ground.”

A real ride-em cowboy who was BLACK!

This is a photograph of a real black cowboy.  His name was Nat Love – “nat” pronounced “Nat-e” and he was known as “Deadwood Dick.”  He got his name from a riding contest in Deadwood, Dakota Territory – not yet states – on July 4, 1876.  Born a slave, he left home at 16 and headed west. He lived a life of adventure – some of it true – and published his autobiography in 1907 entitled Life and Adventures of Nat Love, Better Known in the Cattle Country as ‘Deadwood Dick,’ by Himself.  He died in Los Angeles in 1921 at age 67.  For the historical record, about 40% of the cowboys were black – contrary to how Hollywood has portrayed cowboys on the silver screen. 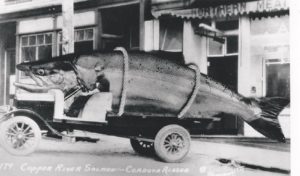 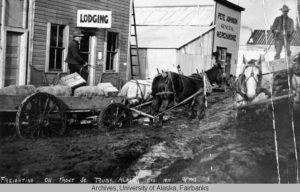 Hollywood’s greatest curse is that it makes the past appear so clean.

Which is why photographs like this are so important.

I call it the “Gift of the Split Second.”

This is an excellent example of the “Gift of the Split Second.”

In October of 1911, in one split second, a photograph captured a reality. This photograph of Front Street in Ruby during the Alaska Gold Rush would never make it into a history text book because, well, it’s just too dirty. Every street in Ruby was like this. You stood in mud to load your wagon.  You were splashed with mud as you rode along. You tracked mud into your home. Along with horse manure from the street. And it was mud, mud, mud until the street froze.

Text book publishers, Hollywood directors and history teachers want the past to be glorious.

There’s not a lot of glory in this photo.

But that’s the way it really was.

THE HUMAN FACE OF THE ALASKA GOLD RUSH, www.authormasterminds.com/steve-levi. 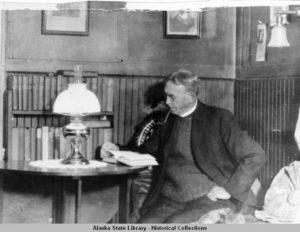 This was Bishop Rowe in about 1920.  No pictures of Billy the Horse exist.

During the Alaska Gold Rush, Billy the Horse was well-known for his encounter with Bishop Rowe. They were coming from opposite directions on the same trail and, as the Bishop was completely bundled up, Billy didn’t know he was talking to a man of God. When asked about the trail he had just traveled, Billy replied “that trail is the god-damndest trail that any dirty son-of-a-b%^&* ever went over.” Then Billy asked how the Bishop had found the trail he had just come over, “Just about the same as you, brother.” (Billy was booming until as late as 1913 and died in April of 1916.)

Billy the Horse was also alleged to have been in a poker game of notoriety in Dawson where Swiftwater Bill Gates slipped a man named Jack Blackburn a sixth card. It was well into the game when Jack asked for some beer and sandwiches. No one objected and they continued the game after a quick bite. When it came time to show cards, Jack laid down four aces. Swiftwater Bill immediately objected and said that Jack had six cards and was thus disqualified.

Search as they could, the three other men could not find the extra card they knew Swiftwater Bill had slipped to Jack. So Jack walked away with the pot.

About six months later, Billy the Horse ran into Jack on the trail and asked him about that game. Jack smiled and said, “I saw that card as soon as it got in my hand. That’s when I got powerful hungry and thirsty. Reason you didn’t see no sixth card in my hand was because I just slipped it into that there sandwich and ate it.” Thereafter he was known as Eat-’em-up Jack.

Once, when Billy was down on his luck and was refused a drink, he got a can of peas and doctored it to look like a dynamite stick. He attached a fuse to the can and went back to the saloon that had refused him the drink. He entered the saloon, lit the fuse and watched while everyone cleared out. Alone, he had several drinks, took a few full bottles of booze before he casually left the saloon. 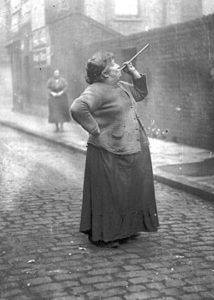 You want a hint?

OK, she works five days a week, only in the very early mornings and her title is a Knocker-Upper.

OK, that’s a pea shooter in her left hand.  (Millennials! A “pea shooter” – once called a “bean shooter” on the East Coast – is a long narrow tube in which you put a pea – or a bean.  They you blow though the tube and send the pea – or bean – flying.)

This was Mary Smith. She was the last of the knocker-uppers.  Her job was to shoot peas ( or beans) against the windows of workers who did not have alarm clocks. She was their wakeup call.